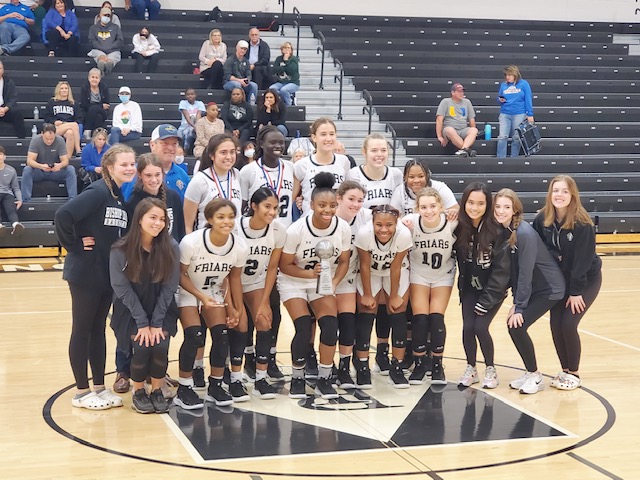 The 58th Annual Knights of Columbus Bob Stras Dallas Classic HS Basketball Tournament took place at Jesuit Dallas and Bishop Lynch High School between December 2nd and 4th of 2021. The competition was great and spirits were high among the 8 boys teams playing at Jesuit and the 8 girls teams at Bishop Lynch. Both of the host schools made it to the finals with BL defeating Sunnyvale 68-35 for the girls championship and Jesuit finishing second in a packed house to Highland Park who returned to the tournament after a long absence. HP’s Rhodes Crow was the MVP in the boys bracket while Maddie Cockrell of BL captured that honor in the girls bracket.

As usual, the Knights of the Dallas Diocese provided all of the trophies and individual awards, commemorative tee shirts for the players, individual personalized luggage tags for all players and coaches, a 48 page program (up from 44 last year), a commemorative gift for the participating coaches and a monetary stipend to the two host schools to cover the considerable cost of referees, security, etc.. Also, the players and coaches enjoyed a variety of meals after the games, many of which were prepared and served by Brother Knights.

Many thanks go out to all who played a part in making the Tournament one of the best ever. We could not do all that we do for the boys and girls without the support of the sponsors both inside of and outside of the Knights who advertise in the Tournament program. We had Knights from at least 8 different Councils that volunteered at the tournament including the Color Corp at each site for the Championship games. Special thanks to Brothers Tony Leto and Rob Happe who toiled in the kitchen of Council 5052 to prepare baked ziti and to Brother Patrick Vlk who stepped up our efforts to have more Knights presence at Bishop Lynch.And of course a big thank you to our host schools who collaborate so closely with the DDC to make this a great event. And finally to the Tournament Committee – 7 dedicated Brothers that organize and manage the event each year.

The 59th Annual Bob Stras Dallas Classic will take place on December 1st thru the 3rd of 2022 and we hope it will be bigger and better than ever!