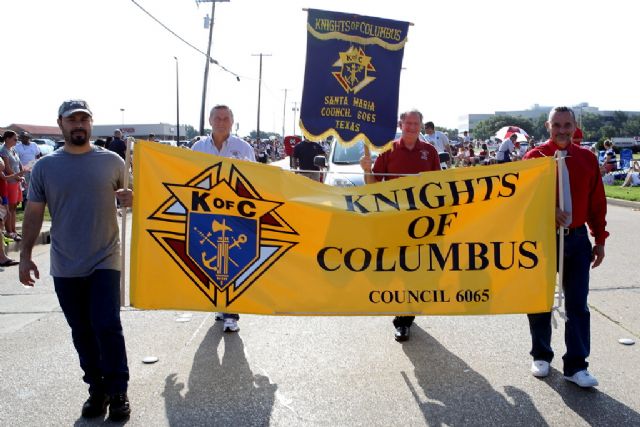 Joined by a Fourth Degree color guard from Christopher Columbus Assembly #6622 and representatives from the new Columbian Squires Ronald Fossier Circle #5726, the men of Santa Maria Council #6065 represented local Catholics in the Plano, Texas, Independence Day Parade the morning of July 4th, 2014. The Council’s entry was awarded the “Spirit of America Award” by the judges. The Knights have been a recurring presence in the parade, which is sponsored by the Early Lions Club. This year’s entry was led by a banner proclaiming “One Nation Under God” carried by members of our new Columbian Squires circle, followed by the Fourth Degree Color Guard commanded by Color Corps Commander SK Bill Ptacek. Following this were the men of #6065, displaying banners, and passing out candy to the children along the parade route. This in turn was followed by a float featuring the Statue of Liberty, standing sentinel over the children of the Knights, who were gathered around “Betsy Ross” (Karie Mitchell), who worked on her 13-star flag as the float proceeded along the route to the cheers and greetings of many onlookers. “Everyone seemed to agree this year’s entry was a big success, and a lot of fun to do. The people really seemed to get a kick out of seeing “Betsy Ross” in the parade,” said the council’s parade chairman, PGK Paul Mitchell. “We’ll be back out for the Christmas parade, and we’re already planning an even bigger entry.” “The 4th of July” Parade was a success,” said Grand Knight Bill Butcher. “Seeing the spectators along the Parade Route, waving their flags, smiling and returning greetings of “Happy Fourth” made the day even more special.”