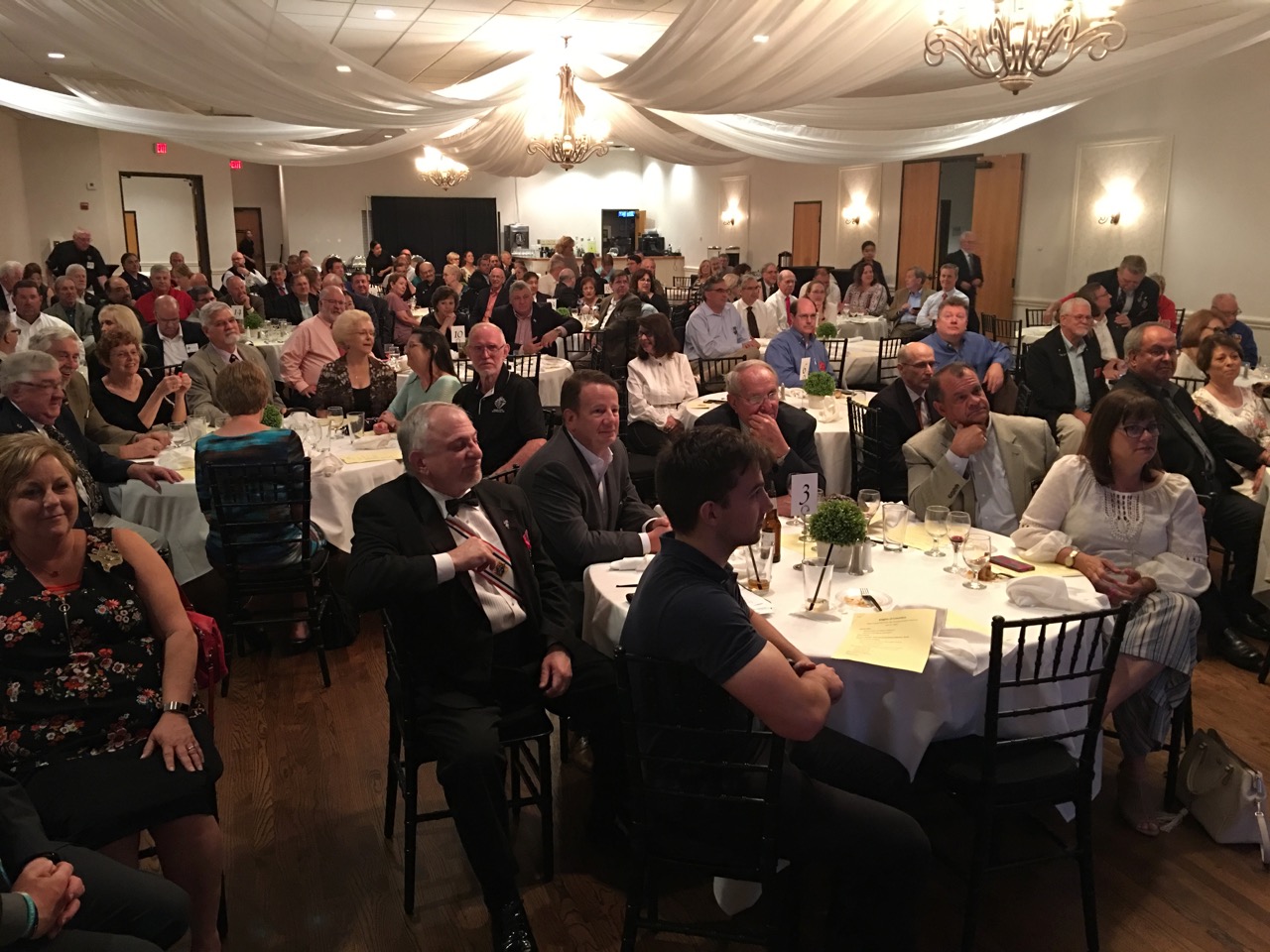 Another tremendous year in the Knights of Columbus Dallas Diocese Chapter culminated in a great turnout for our annual year end event. Our keynote speaker the Most Reverend Bishop Edward J. Burns addressed a full house of 171 guests at Council 799’s KayCee Hall on Shoreview Dr in Dallas, Texas. Chapter President Patrick Vlk called the meeting to order and Fr. Morris and SK Pat Conway led the Opening Prayer and Pledge of Allegiance respectively. Past Texas State Deputy Douglas Oldmixon flew in from Austin to make special presentations. Our Diocesan Deputy Roy Rabenaldt introduced keynote speaker Bishop Burns and later held the election of chapter officers for the new fraternal year 2019-2020 which were approved as follows:

Diocesan Deputy Roy Rabenaldt delivered his closing remarks and door prizes were awarded to the ladies by him and President Patrick Vlk.

A recap of the awards presented this evening follows below:

Our Immediate Past State Deputy, Douglas Oldmixon, was flown in from Austin to specifically present this outstanding award to Council 12480 St. Francis of Assisi, Frisco Texas.

Charles “Chic” O’Conner joined the Knights in 1943. He has very instrumental in starting Special Olympics in Gregg County, which is in the Longview, Texas area. His special daughter, Monica, inspired him and the O’Conner family to be Timers, Huggers, Chaperones, & Pizza Providers for Gregg County Delegation of Special Olympians. After Mr. O’Conner’s death, the State announced this Memorial Award.  This award recognizes a Knight for his exemplary contributions supporting Special Olympics through Leadership, Volunteering, Fundraising and Community Involvement.  With great pleasure we presented the Chic O’Conner Award to Phil Coup.

The Texas State Council annually returns 70% of the council charity contributions to the state, to the Bishops of each of the 15 dioceses in Texas. Each Bishop designates the specific use of the money  in his respective diocese.  When this program started, then Bishop Grahmann designated the Ministry to Persons with Disabilities and Caregivers and to the Deaf.  Bishop Farrell and now Bishop Burns have continued that designated Ministry. The diocesan councils are presented awards at various levels.  This night we announced the more significant councils to be awarded.

All of us have been involved in organizations where you meet people who are involved for all the wrong reasons. They seek power, recognition, profit or personal gain. When you spend any time with this year’s nomination for Knight of the year if is so apparent there is no other motive, this is his passion.

He was involved with the “Hike for Life” in the mid 80’s where he had the vision to move the organization to a Non-profit corporation so the donations would be tax deductible.  Along with generating money it brings us, the community, together to show the world our solidarity to this cause. To help recognize the children lost to abortion he created the ‘Ace wings”, which so many of us have earned and proudly wear. Each “Ace Wing” represents a child lost to abortion, this blessed object lets others know we clearly stand for “Pro Life”. Not only does he chair both the diocesan and the state Culture of Life programs, but his enthusiasm is contagious. His son Andrew, who joined the Knights 12 years ago, is now the State Pregnancy Resource Coordinator.

When one gets to know this man, who has been a Knight for 26 years, it becomes apparent,  this is his passion. All of us can say we are proud to be in the same Diocese as this Man. Please join us in recognizing from Council 11862 at St Michael in Garland, the Knight of the Year, SK Tom Clark.

To become a Grand Knight, there are some basic skills and training one goes through in order to be an effective leader of the council. On rare occasions circumstances arise which are not covered in any training that I have yet witness.

There was a council where there were serious discussions about removing their charter. The Parish was going through a transition where the demographics were changing. The District Deputy and the newly appointed Grand Knight had a decision to make, either give up, or adapt and embrace the new challenges. The challenges were not easy, for the Parish was becoming more and more Hispanic and the Grand Knight, to say the least, was not fluent in Spanish.  They began recruiting Hispanic parishioners into the council where the few active English speaking members went out of their way to help the Hispanic members understand what was going on during the meetings. This Grand Knight translated the important reports and used a translation program for all the minutes so they would be available both in English and Spanish.

As the council grew, they began taking on numerous tasks around the parish. The Pastor, Father Capra, stated he could not do his job without the Knights and he himself joined the order soon after his assignment to the parish.

By embracing the changing culture of the parish this Grand Knight, not only exceeded the membership goals, but has become an example for us all.

It is with great pleasure we present the Grand Knight of the Year from Council 10879 in Bonham, TX, to David Watson.

Council of the Year: Council 6065 Plano

This year there were numerous nominations for council of the year. It is almost overwhelming and humbling to see all the activities being done by the Knights throughout the diocese. When we looked at the nominations, we noticed one council had decided to take on a fundraiser for one of the projects that is near and dear to the KofC, The Wheelchair Mission.  Our statewide goal this year is to raise $400,000 which will provide 2,600 wheelchairs to donate to those in need. It is estimated that each wheelchair we give will have a direct impact on the lives of 10 additional people.

Thanks to Prince of Peace each year the Dallas area leads the way in donations. This year another council decided to step up and hold a wheelchair drive.  In their first ever drive they raised $36,000 which translates to 240 wheelchairs to be given away.  This council also embraced the “Family Fully alive” program by donating over $600 in material to support the program. They also also donated another $56,000 to other charitable causes with the largest expenditure of over $25,000 going to Pro-live.  They were not done! They also gave another $15,000 to the parish for school and youth groups as well as almost $6,000 for clergy and seminarian support.

This parish is now 50% Hispanic and most the council’s new members this year are from their Hispanic brothers.  This helps this council truly represent and understand the needs of their parish community.

Each council is there to support our clergy but to be a successful council we need the support of the parish priest. So along with recognizing this council we need to recognize and thank Father Clifford Smith for his support.

We would like to recognize the council of the year, Council 6065 at St Mark the Evangelist in Plano.

As Knights we pledge to donate our efforts and time in complete support of our clergy. When reviewing the nominations for Priest of the Year we realized we have a priest who has donated a lot of his time and energy to the Knights. We can claim him as a true son of Texas for he graduated from University of North Texas and from the Anglican School of Theology at university of Dallas.  He served 18 years as an Episcopal Priest while he and his wife, Fran ,raised two sons.

After his ordination in 1995 he served two years as a Parish Priest at St Jude Catholic Church in Allen. He then spent 11 years as a Parish Priest serving the community at St Anthony in Wylie.   Although he retired in 2008 he has remained very active. He has served as the Associate State Chaplain and is currently the Faithful Friar for Assembly 2139 as well as the 3rd Texas District Friar and the Chaplain for this Diocese of Dallas Chapter.

For over 21 years he has freely given of his time, his wisdom and his guidance to the Knights of Columbus in so many ways. As much as we want to show our thanks to him tonight, we would be remiss if we did not also thank Fran for sharing him with us. Please give a well-deserved welcome to our 2019 Priest of the Year, Father Loyd Morris.