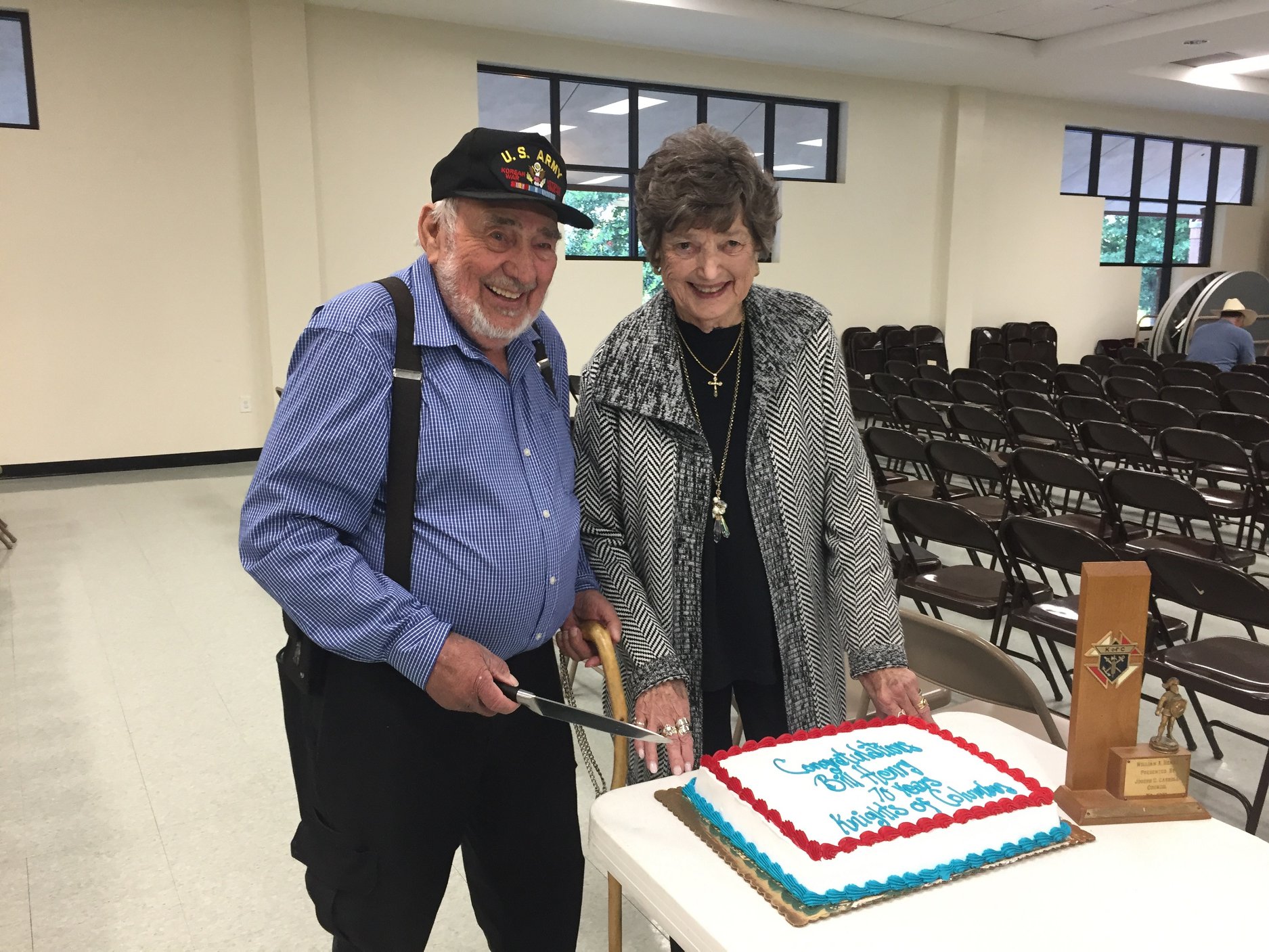 On Tuesday, June 11, 2019, St. Anthony Council 12300 held a dinner and presentation in honor of the 70th Anniversary of Bill Henry’s entry into the Knights of Columbus, in Father Pondant Hall at St. Anthony Parish in Wylie.

Bill was initiated into our order in 1949 at the age of 19, in Seneca, Kansas. His father was a Knight, and each one of his two brothers became a Knight. He later became a charter member of a new council in Roseville, Minnesota. His 3rd Council was in Cedar Rapids, Iowa. While in Cedar Rapids, Bill was appointed District Deputy and help start a university council in Iowa City. He then was the Charter Grand Knight of Council 5390 in Marian, Iowa in 1963.

His 5th Council, which he also chartered, was Council 6065 in Richardson, in 1968. Bill’s wife Jane suggested to name it the “Santa Maria” Council, after the Christopher Columbus flagship. This council has since moved to St. Mark’s in Plano, and spawned a new council at St. Elizabeth Ann Seton in Plano.

Bill’s 6th and current council is Council 12300, for which Bill player a major role in founding 20 years ago alongside Charter Grand Knight Charles Lutz. By then, Bill and Jane were well known figures at St. Anthony Parish, as Bill was active in the men’s club and he and Jane were active in the music ministry, leading music at many masses in the historic white church.

Jane and Bill also used their professional talents to help in the purchase of various real estate properties that surround St. Anthony, St. Joseph and St. Marks Parishes to help them grow to the size they are today. The Henrys never charged a church a fee for their real estate services.

Bill held about every office including Grand Knight in the councils of which he was a member. Bill has also been active in the 4th degree and held various state and diocesan positions. It has been estimated that the current membership in Councils that Bill played a major role in founding must number somewhere in the order of 1,000 Knights, and of course have had many more members over the decades since their founding.

Many of Bill and Jane’s family members were present as District Deputy Rick Guzman and Deputy Grand Knight Bryan Finley presented Bill with a framed certificate and cake acknowledging 70 years of Knighthood. The Deputy Grand Knight also gave an address recognizing and Bill’s bringing of many men into the order as well as Bill and Jane’s many contributions in support of their parish communities, and for their acts of service and charity.

Grand Knight Gene Ryan stated that “Bill has been a guiding light in this community for over 20 years. He is the kind of person I wish there were more of in the world. It is an honor to know him, and to able to call him friend and brother”.